To make existing chillies sharper, you can use a few tricks. Actually, the sharpness is essentially determined by the type of chili. Since the degree of sharpness is a decisive criterion in the selection of chillies, the Scoville value can usually be found on the Internet or on the seed package.

Natural the sharpness of the chillies is influenced by the time of harvest, the nutrients and the amount of sun.

Ripe pods are sharper with the same chilli. Many chillies turn red, some remain yellow or orange. If the chilli ripens longer, more capsaicin can be produced. With overripe fruits, however, the content sings again. Caution: a green Trinidad Scorpion burns more devilishly than a red Cayenne.

The Scoville scale indicates the degree of sharpness in SHU (Scoville Heat Units). From 0 for no sharpness over about 6000 for Jalapenos up to over two million for Carolina Reaper Chilis. 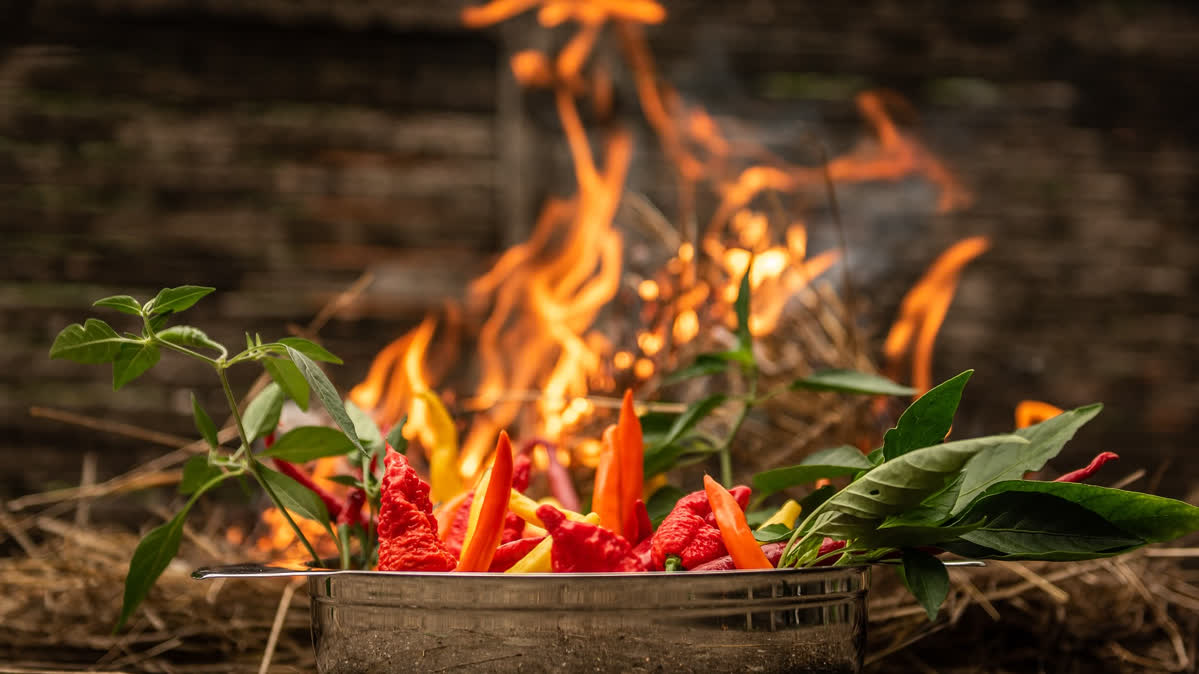 Capsaicin has its highest concentration in the chilli pepper of the seeds. The alkaloid is formed, which irritates pain receptors in humans and mammals in order to protect their seeds. Birds, on the other hand, do not perceive capsaicin. In the course of evolution, chillies have decided to have their seeds spread by birds. This successful concept of propagation and distribution bears the scientific name ornithochorie.

Aren’t their chili plants hot enough?
Chili plants can be made to produce more capsaicin if they fear that their seeds will be wasted or destroyed.

There are several approaches to increasing the severity of chillies. However, no one has been sufficiently scientifically researched. But all of them have one thing in common: to put chili plants under stress.

I’m sure you’ve read this note a lot. It is also the quickest to put. Only when the leaves become wilted is watering started. Never more than absolutely necessary to keep your plant alive. The disadvantage of this variant is that the aroma and the quantity harvested suffer. This method is best used a few days before the harvest.

Capsaicin is formed by chili plants so that only birds eat the berries and seeds and spread them. Another reason for the formation of capsaicin is the defence against moulds. Such a fusarium infestation occurs more frequently in wetlands.

A humid environment leads to higher seed production in chillies and thus to more capsaicin in the placenta. According to researchers, this is controlled by the opening of stomata, which balance the environment. This would also explain the particularly sharp varieties of Capsicum chinense, which originated in the Amazon basin.

Just remember that chilli roots do not tolerate waterlogging. If the soil is wet, the Capsicum plant will soon shrink.

American breeders swear by worm droppings. Fresh fertilizer from worms is highly concentrated. Magnificent growth and high crop yields are the benefits. According to the theory of high-power chili growers, the worm fertilizer causes the plants to suspect a worm attack would be imminent. As a result, more capsaicin is produced in the chilli peppers. This increases the Scoville value. You can be skeptical, but success proves them right.

The special fertilizer is also available in Germany from various dealers and manufacturers.

Competition stimulates business. If there are stronger competitors near the plant, it may have the worse leaf. More effort is then required to assert oneself in propagation.

It is therefore not possible to add a few jolokias or Carolina Reaper to your existing jalapeños. In many nurseries you will get adult Habanero chili plants. At the latest in the mail order business also the hottest varieties.

There seems to be a natural hostility between grass and chilli. In specialist information to US farmers it is regularly pointed out that the fields must be cleared of grass before sowing. A regular removal of weeds, preferably by hand, is recommended.

Recently, the degree of sharpness of chillies was measured on neighboring fields. Researchers found that fruits from fields with more grass also had a higher capsaicin content.

What other possibilities do you know of for pimping chili plants?

It's astonishing: in the right neighborhood, chili plants grow much better. While researching the reasons exciting things were discovered. Read More.

Magnificent chili plants with countless fiery red chillies. So that this does not remain a dream, pepper plants should be supplied at the right time with fertilizer.

You can get chili seeds for planting in garden centers, online shops and even fresh chili peppers. How? Lets get started: